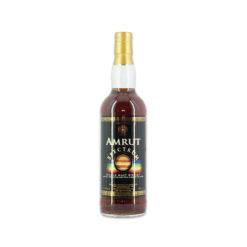 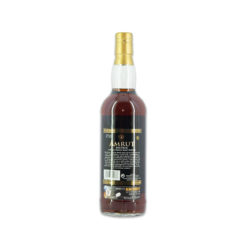 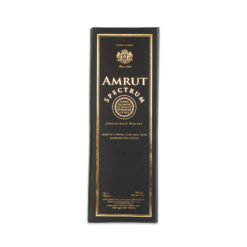 In 2015, Amrut released the world’s first ever multi-wood barrel Single Malt Whisky and named it ‘Amrut Spectrum’. One of the most innovative whiskies that has ever been produced. This is a bottle of the first batch. Only 1000 bottles were released worldwide.

In 2015, Amrut released the world’s first ever multi-wood barrel Single Malt Whisky and named it ‘Amrut Spectrum’. We have one bottle with its original box.

Amrut Spectrum is an innovative limited release single malt from the Amrut Distillery in India. Five “Frankenstein casks” were custom built for this whisky maturation experiment. Each is made with staves from five different types of wood: ex-Oloroso, new French oak, new American oak, new Spanish oak and ex-Pedro Ximénez Sherry cask. The whisky was initially matured in ex-bourbon casks for 3 years. It then spent another 3.5 years in the special hybrid casks before being bottled at 50% ABV.

Bottle is in excellent condition, the box has some minor scuffing.