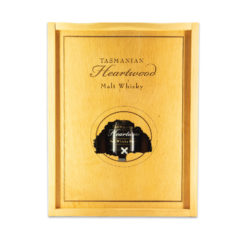 ** To be sold as a set of four, with release number 1 as a separate bottle and an impressive limited release of three Heartwood cask strength “@#$%^&” (releases 2, 3, & 4) labelled whiskies all bottle number 20 encased in a Huon Pine Box as photographed **

Heartwood is an independent bottler, run by local Tasmanian alchemist Tim Duckett (aka Mr H). Heartwood has won countless awards on some of the most prestigious whisky stages over the past decade.